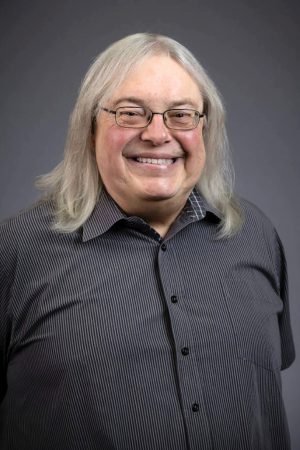 Sashimi with a side of cold sake, good conversation, and a belly full of laughs—that was the life anthem of Dr. Jose Martinez-Diaz. Jose was no stranger to enjoying the company of family and colleagues while eating “family style” and discussing the world and his two deep interests: behavior analysis and music. On September 21, 2020, Jose gave his final sign-off on a beautiful life that was filled with a passion for people and improving their quality of life. He spent his final minutes of life beside his wife of 34 years, Danette Onstott, while listening to Bob Dylan’s Forever Young.

Dr. Jose Martinez-Diaz (b. Sept. 7, 1950) spent his formative years in Cienfuegos, Cuba witnessing the societal devastation of Castro’s revolution that would cause family hardships. At a young age, he discovered that people with exceptionalities were being dehumanized and punished for their behavior. Jose’s curiosity about their lives and his observations of the horrific treatment of these individuals were driving forces in what would become his life mission to ensure that no one would ever experience the same. Immigrating to Miami in 1961 with his sister, he was later joined by his parents, Juan Antonio Martinez-Gonzalez and Gracia Hildelisa Diaz Suarez. Jose studied psychology at the University of Miami and went on to pursue an MA and PhD in clinical psychology (behavior analysis and therapy) at West Virginia University (WVU).

Throughout his undergraduate studies, Jose worked in public and private settings with individuals who had been labeled with myriad disorders and illnesses. In keeping with what he would later teach his students, he looked beyond how others categorized people and sought out their realms of potential. Often, he saw more potential in them than others did. Years of clinical experience, along with his time as an administrator, conveyed the sad reality that people with disabilities were often treated poorly. Training the next generation of behavior analysts became Jose’s primary mission.

Jose was distressed by the uneven and often unethical clinical practices he observed, and he founded ABA Technologies in 1992 to provide clinical services. Later, he focused the company’s efforts on training new behavior analysts and he incorporated the company in 1997. Soon after, he was instrumental in the founding of the School of Behavior Analysis (SoBA) at Florida Institute of Technology in Melbourne, FL. For two decades, he taught in and chaired the Melbourne-campus program. He left his post in December 2018 but continued to teach until May 2020.

Along with establishing the original program, Jose and his beloved colleagues built additional degree programs in applied behavior analysis and organizational behavior management, and assisted in the creation of the Scott Center for Autism Treatment. His leadership and instinct for recruiting talented faculty and eager students have turned Florida Tech programs into internationally recognized centers for excellent behavior analytic training. SoBA grew exponentially, and even after Jose was no longer teaching every course, his unwavering commitment to ethical practice and conceptually sound scientific teaching remained solid. He continued to influence SoBA faculty, students, and programs. Jose was named Associate Dean at the College of Psychology and Liberal Arts in 2013 and given the title of Distinguished Professor in 2019.

Jose’s dissemination efforts reached an international audience through his partnership with the Florida Tech ABA Online program. The program trains behavior analysts from around the world and has made it possible for people with few resources to learn from great practitioners and researchers and to earn certificates and degrees in behavior analysis. Many of these students have gone on to found and direct ABA programs in their own communities—from Florida to Iran to Scotland. Most students have never met him personally, but they felt deeply connected through his stories, commitment, and teachings. On screen, they watched this vibrant and compassionate man, dressed in a tropical shirt, teach from his rich well of knowledge and understanding. They were privy to his insistence on showing the emotional side of what it means to carry the honor and burden of changing lives. Tens of thousands of behavior analysts have learned from Dr. Jose Martinez-Diaz and have brought that light and dedication to their own practices in an effort to impact and empower others.

Jose has received several awards for his contributions to the field of behavior analysis. In 2019, WVU honored his remarkable achievements as recipient of the Eberly College of Arts and Sciences’ Distinguished Alumni Award. He also received the Charles H. Cox Award for Outstanding Service and Advancement of Behavior Analysis in Florida (2005), Provost’s Academic Leadership Award (2005), Jerry Shook Award (2018), and the Best Faculty Member from Florida Tech’s Office of International Student & Scholar Services (2019).

In Melbourne, Jose will be remembered by restaurant owners and community friends for his buzzing personality and an ineradicable memory for people’s names, facts about their lives, and favorite items on the menu. Wherever he walked, he usually made as much of an impression on others as they did on him. He displayed compassion for the human spirit through generosity and camaraderie. He could sniff out potential even in strangers he would meet at a treasured dining locale—on more than one occasion, he convinced someone to get a PhD in behavior analysis after just one shared dessert or a laugh.

Jose was a lover of musical experiences who had an insatiable desire to share with others his music collection in his home audio-video theater. Colleagues in town for work or to attend a conference enjoyed staying at the family home, with its comprehensive library of CDs, vinyl records, and music videos, ranging from classical to punk rock. Jose knew all of the recordings he owned and would curate a custom list to suit the taste of any guest.

People around the world mourn this tragic loss. Many have honored Jose by wearing tropical shirts, eating sashimi, and reconnecting with what they do and why it matters so much. If you met Jose—either in person or online—then you probably have a Jose story. Please feel free to share your story with his family at info@abatechnologies.com. The family will create a foundation to honor Jose’s life work and support scholarships for students pursuing and advancing behavior analysis. Learn more about making a contribution at info@abatechnologies.com. On Saturday, October 3, 2020 the family held a private family celebration of Jose’s life. Virtual memorial services are being planned, as are in-person celebrations at a later date. All will be announced in the near future. 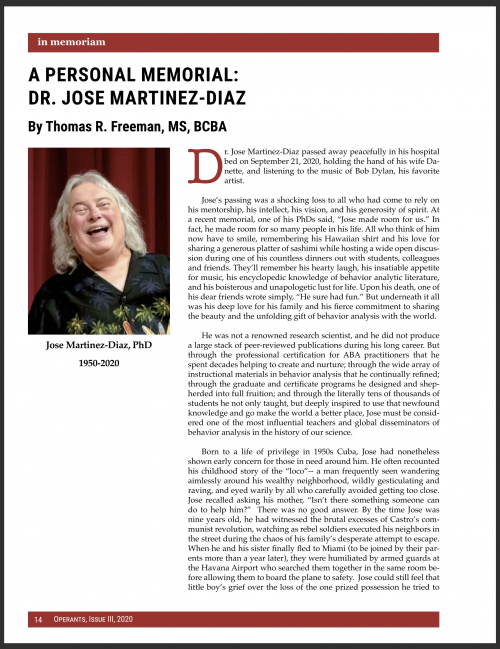 This is sad to hear. Jose and I were in grad school at the same time, but I lost track of him after that. Oddly, I live in Vero Beach, FL, and when I attended a local school employee training in ABA. there he was! It took me a few minutes to be certain it was the same Jose I knew, but he readily confirmed it at our first break. He certainly was an expert in ABA, a great teacher, and a very cheerful guy. Sorry to know he is gone.