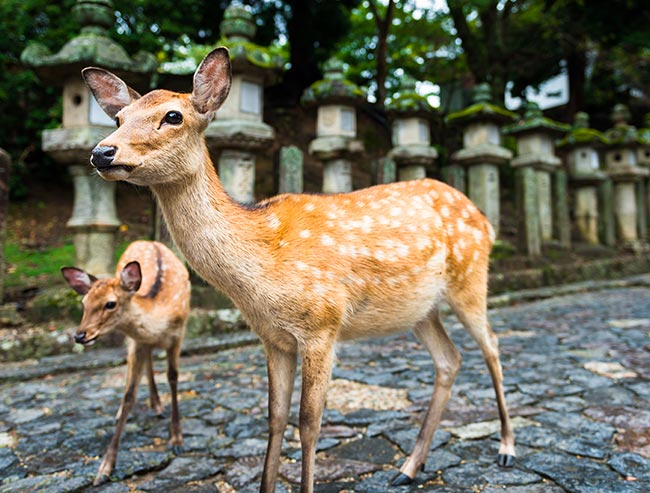 For the past six months I have had the pleasure of living in the beautiful city of Nara, Japan, during a sabbatical leave to conduct research at nearby Osaka Kyoiku University with my fine colleague Professor Hiroto Okouchi. Among the many beautiful sights of Nara is a 1300- acre park. And in the park are about twice that number of deer; sacred deer that are more than highly protected by law. The deer are thought by those practicing the Shinto religion to be the guardians of human souls. I should add that one of the two World Heritage sites is Kasuga Shrine, one of Shinto’s most important sites. These world heritage sites mean that for more than a thousand years, the Nara deer and their ancestors have been in constant contact with visitors from many places in Japan and around the world. As a result, they—the deer, not the touristas— are pretty tame; although signs everywhere warn visitors of various transgressions the deer may commit (butting, biting, kicking). I personally have seen nothing of such nasty behavior. Au contraire, I have seen only very well-behaved deer that allow you to approach, pet, and photograph them. 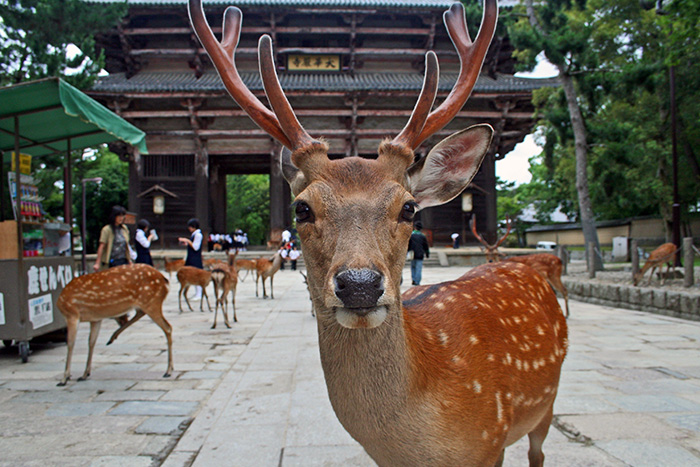 It is possible to purchase from various vendors throughout the park, small packages of “deer cookies” that can be fed to the deer. This is a popular activity among the Homo sapiens visiting the park.  Now, many people are not content to simply give the deer cookies “for nothing.” Good behaviorists that they are, they want bang for their reinforcement yen (in this case 150 yen or about a buck and half for about a dozen wafer-thin deer cookies). Somewhere along the way, someone got the idea to have the deer “pray” for their dinner by nodding their heads up and then down in a quick motion. Not all deer do this, nor do all people enforce a contingency between such behavior and reinforcer delivery, but enough do and it is reinforced with sufficient frequency that on seeing someone approach with a package of deer cookies, many deer start engaging in this rather stereotyped response. This is much to the delight of the potential feeder, who typically immediately dispenses a cookie. The result is a mess o’ deer all walking around praying as a means of preying on visitors’ cookies.  An example of such behavior appears in the accompanying video clip. 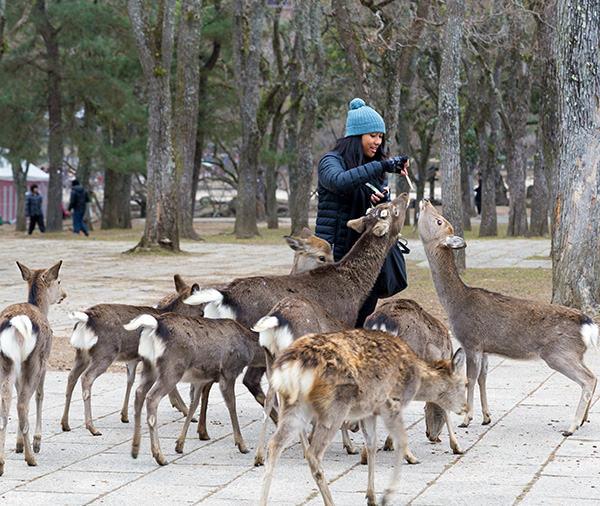 The behavior analyst in me can’t but wonder about all the complexity involved in the behavior I am observing each time I walk through the park (which is often; it is too beautiful to resist). First are the deer, the praying response of which is reinforced intermittently and perhaps on a lean schedule (because even the visitors burnishing cookies don’t reinforce every instance). There also is stimulus control—deer are more likely to start “spontaneous” praying when they spot a sucker with cookies. I also wonder the extent to which this behavior is transferred to the upcoming generations of deer, and how it is transferred: whether it is reinforced directly or passed on through some process of imitation. My guess is both. And then there is the behavior of the Homo sapiens visitors. Deer feeding is reinforced no doubt by social contingencies imposed by other members of the human species—“Oh, go ahead and feed it! Don’t be scared; they don’t bite.” [But they may bite.] Also, the Homo sapiens are reinforced by what the deer do. A praying deer seems very likely to reinforce cookie-dispensing behavior of the visitor. Interesting behavior is where one finds it, and it exists aplenty in the splendid city of Nara. Out of Thin Air?